(Note: St. Annes was a temporary amalgamation of Ardagh and Legan)

(This was the first 5-in-row of Ladies SFC titles)

(This was the first 4-in-row of Ladies SFC titles)

(Clonguish went on to win the Leinster Intermediate Club Championship title, becoming the first club from Longford to win a provincial title)

(The 1996 decider was notable for two reasons… Firstly, it was played in February 1997 due to the success of the Longford senior team in competition in late 1996. Secondly, the scoreboard at full time read 2-7 to 2-6 to the St. Helens-Rathcline amalgamation. With the players celebrating, the referee was certain the scoreboard was incorrect and so counted his scores and informed both teams that Ballymore had won by 1 point. With Ballymore now celebrating and St. Helens-Rathcline having now objected, the ref counted the scores again and concluded a draw. A review of the video later found that the St. Helens-Rathcline amalgamation had indeed won the game)

(This was the first 3-in-row of Ladies SFC titles)

(St. Annes was a temporary amalgamation of Ardagh & Legan. The McCabe cup is missing the winner for this year)

(St. Annes was a temporary amalgamation of Ardagh & Legan)

(This was the first back-to-back of Ladies SFC titles)

Note: The McCabe cup is inscribed with wrong winner for 1985. It has ‘Ardagh’ when it should be Granard. 📷 here

(Éire Óg was the name of the Ladies Club in Drumlish parish, later renamed St. Helens) 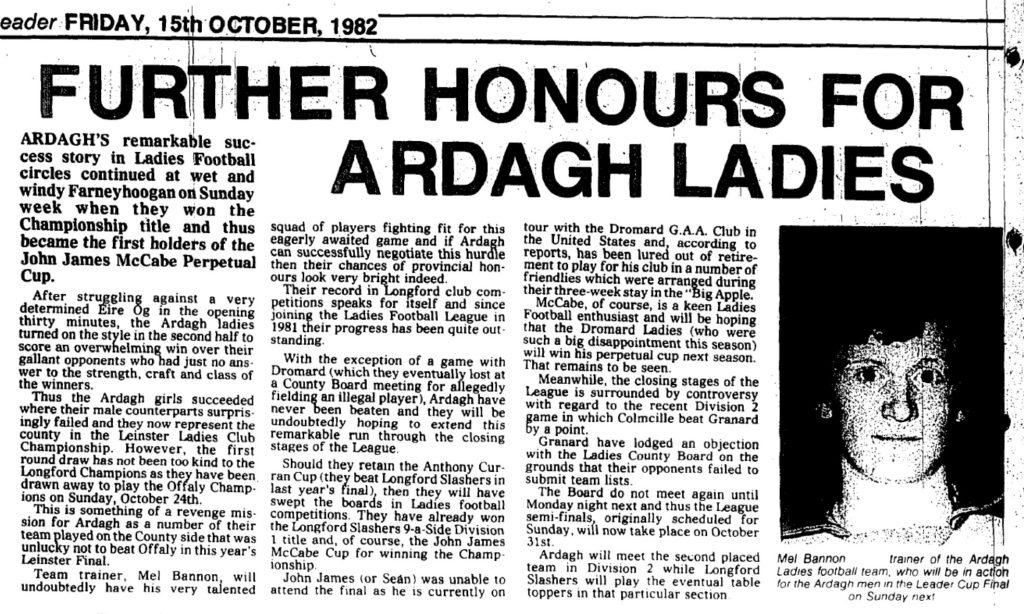 The names of all winners are displayed in the roll of honour in line with the name used by each club at the time of that final, to preserve that historic record.

The following clarifications apply to Ladies SFC winners down the years:

– Ardagh ladies club is now called St. Brigids Gaels ladies club.
– St. Annes was an amalgamation of Ardagh and Legan ladies clubs.
– St. Helens was the original name of the Ladies underage club in Drumlish while the Ladies senior club was called Éire Óg. By the end of the 1989 season both senior and underage were under one common name of St. Helens.

The first Ladies Senior Football Championship competition in Longford began in July 1982 with Ardagh winning the first title with victory over Éire Óg (Drumlish) in the final, thus receiving the new J.J. McCabe cup. The McCabe cup would be presented to all Ladies SFC winners from 1982 to 2011 and was replaced by the Alison Smyth cup from 2012.

This content was researched & compiled independently from 2014 to 2022.
Please cite this website if quoting or using this material elsewhere.